Why I Don’t Believe in Cheat Days 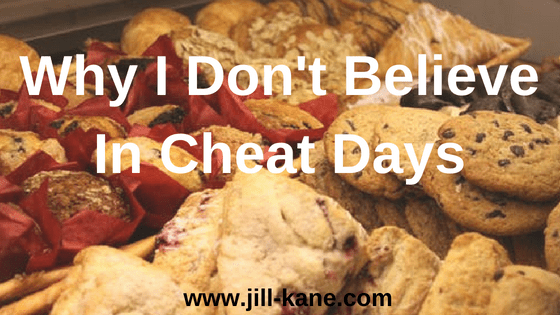 Have you ever been told that dieting for too long will slow your metabolism to a snail’s pace?

If so, you may have heard that the way to prevent this from happening is to have a cheat day or cheat meal to satisfy your cravings and trick your metabolism into thinking famine is not just around the corner.

What is a Cheat Day or Cheat Meal?

It’s when your inner food cop takes a vacation and you have license to eat whatever you want – but only for a short pre-determined window of time. Some people have rules around how they eat on their cheat day or during their cheat meal and some prefer the “anything goes” approach.

Like the annoying answer to most questions in life, the answer is “it depends.”

First, here are my problems with the idea of cheating:

1. The word “cheat” makes it feel wrong or bad like I am doing something illegal or immoral. Also, if you planned to cheat is it really a cheat? Back in the day when I competed in figure competitions, we replaced the term “cheat meals” with “treat meals.” It sounded much better, but I still did not like the idea in general because…

2. I don’t like the idea of “saving” my cravings for a specific day or time. I found that when I did that I would go overboard and just felt like crap because, you know, I wouldn’t be getting another cheat meal for an entire week after that point!

3. You can do some serious damage. It’s really scary how easy it is to undo an entire week’s worth of workouts in a single sitting. Even more frightening to think how much you can set yourself back with an entire cheat day!

Back to the question about whether cheating works…

Many of the participants in studies where people lost more weight by including cheat meals were dieting pretty hard. In one study*, there were two groups of 37 women. One group was eating only 55% of their caloric needs (basal metabolic rate) each day for six weeks. The other group was eating slightly less (45% of their caloric needs) for 11 days, followed by 3 days of eating as much as they wanted. At the end of the six weeks, both groups of women transitioned to a maintenance level of calories for 4 weeks. At the end of those 4 weeks, the body weight of the women who used traditional dieting increased more than the body weight of the women in the group that had cheat days. If you look at fat mass, the traditional dieters gained fat mass again fast, but the group that was allowed cheat days did not.

Again, we have to look at the fact that this was a controlled study. Eating only 45-55% of your caloric needs is minuscule for most of us. Common sense is that your metabolism will certainly take a hit if you cut your calories in half and keep them there for weeks on end.

It’s nice to see the scientific proof that overeating for a short window of time after dieting really insanely hard will not impede your results, but it is highly impractical. There is a better way!

The leaner and more muscular you are, the more cheat meals you need and the bigger they need to be. Have you ever seen one of Dwayne, “The Rock”, Johnson’s epic cheat meals?

The reason he can get away with eating that much is because the demands he is placing on his body during his grueling 2 hour daily workouts to fuel his 260 lbs. muscular body require it. And, I am quite certain he is eating really healthy and monitoring his macronutrients like a professional bodybuilder. You don’t get big and ripped like that by accident.

For us mere mortals, the same rule applies but on a smaller scale.

If you are obese or overweight, your going to have a tougher time assimilating all those calories and end up storing a larger portion of them as fat than someone who is leaner. As you lose weight and start getting leaner and adding more muscle, you will find that you can add in a couple of more cheat meals without it packing on the pounds. (This is what maintenance looks like!)

I would advise obese individuals not use cheat days and instead recommend including smaller, cheat meals less often. Most obese people can lose weight by changing up their food choices to higher protein, more plants, and lower sugar. You also want to avoid conditioning yourself to rely on food as a reward and instead focus on non-food rewards that excite you.

Weight trainers who are continuously breaking down muscle and need to repair muscle fibers are going to require more calories especially carbs and protein to aid in that recovery process. If you only do cardio or aerobic activity you aren’t creating the same demand on your body.

If you make the meal you have after weight training your cheat meal you’re more likely to have those calories get shuttled to your hungry muscles than stored as fat.

Taking in fewer calories for a long period of time disrupts your hormones whether you’re already lean or whether you’ve got a lot left to lose. The best way to get your hormones working in your favor again is to feed yourself properly so they know it’s okay to burn fat and not store it and it’s okay not to trigger the hunger signals of your brain.

This is probably the single biggest factor to consider as you are wondering if you should add cheat meals to your eating regime. If you struggle with eating due to stress or as a means to cope with some tough stuff going on in your life, then cheat days can do more harm than good for you. Instead of being an enjoyable break that replenishes your energy and boosts your metabolism, they can be a slippery slope that leads to frequent binging and weight gain.

A better approach is to become more mindful of what is triggering you to eat in the first place. Start journaling. Pause when you feel the urge to overeat and in the moment just ask yourself what you are feeling. The first step is awareness, and from there you can figure out what you’re really hungry for and start to make conscious decisions about eating.

Refeeds are similar to cheat or treat meals in that they are specific periods of time in which you overfeed in order to reap the maximum benefit of your body’s hormonal environment.

The difference is that refeeds are more intentional. It’s less “eat whatever you want and however much you want” and more “eat a specific amount of carbohydrates, protein, and fat” and usually the food choices are high-quality and more nutrient dense.

Planned refeeds are usually a part of a low-carb diet where every 3 to 5 days you eat enough carbohydrates to restore your glycogen stores (anywhere between 150-400g depending on your size). This type of diet is known as carb-cycling. Staying low-carb for too long can mess with your hormones, especially insulin. Incorporating carb refeed days keeps your body sensitive to insulin which guards against insulin resistance and weight loss resistance.

Although I dislike the term, cheat meals (not days!) have their place – if they are not free for alls! As I’ve mentioned in my video series “How To Lose Weight With Mindful Eating” I believe in flexible eating following the 80/20 rule. 80% of your meals should be healthy, low-sugar, unprocessed, and free of crap ingredients you can’t pronounce. Up to 20% of your meals can be less than optimal, whatever you want, so long as you don’t 10x your portion size. Using the 80/20 approach when trying to lose weight will keep you from feeling deprived and miserable.

This is the approach that has worked best for so many of my clients, as well as myself, especially in maintaining weight loss long-term.

Have you ever used cheat meals/days? If so, tell us about it in the comments below! How did it work out for you?